on October 24, 2017
As my regulars now know, I launched my first book last Friday 20th October.  Called Before the Tide Went Out it tells my own story from my earliest memories into my childhood recollections of the village of Cheekpoint and the fisherfolk that made up my world.  I bring you fishing in my teens and early adult years and share the magic and misery as I went from salmon driftnetting to eel fishing and herring driftnetting. As tough as I thought the life was, it was nothing compared to writing it all down, and that in turn was painless compared to getting it ready for publication.  But of course in the run up to actually launching it, we had the most powerful storm to ever hit the country followed up by our first winter storm.  Ophelia and Brian nearly up-scuppered the lot.
At this point I imagine the ex hurricane Ophelia is known worldwide. The run up was alarming with weather warnings, ships and fishing boats running for cover and a national emergency being declared.  Monday 16th October started bright and fine, and initially the hopes was that the storm would skirt the west coast and leave us alone, if with a lot of egg on face. But alas by 11am we were feeling its first effects here, which was about low water in the harbour...always a change with the tides!  We were delighted when Joel, our son, returned from fishing just about the same time. They had gone to Woodstown to try protect the Oyster crop, but the wind had prevented the tide from dropping to its normal level...another bad sign.

My new Book “Before the Tide Went Out”
International orders can be made here.
Find out where you can buy off the shelf or order from Ireland here 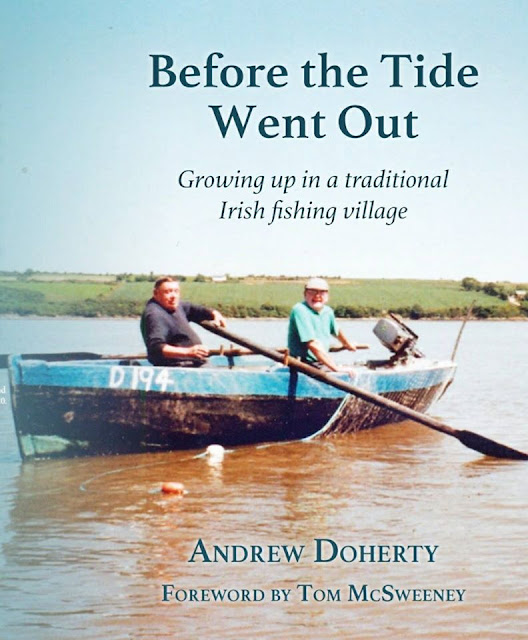 By 12 noon the trees were bending over dramatically and the river was as wild and frenzied as I can ever recall...and then it just got worse. Yet we escaped the worst of the damage as roofs blew off, tress came down and electricity and telephones went dead.  The government were vindicated in their advice of shutting all schools, restricting transport and advising workplaces to close early...that of course also included my printer, Lettertec in Cork.

On the Tuesday, the clean up started and the extent of the damage was realised. Schools remained closed and many businesses were unable to re-open, being cut off by trees or starved of the essentials such as water or power to run, Lettertec being one of them!  We received an email from my namesake Andrew Haworth telling us he would be in contact as soon as he knew anything.

By Wednesday we were panicking.  Cheking the ESB faults map gave no reassurance.  It estimated it could be Saturday 21st before the power was restored to the printers.  Family friends in the Cork area were without power too...life was tough. We tried ringing but to no avail, a follow up email went unanswered.  Should we cancel?  Two days to go, how long does it take to print 500 books?  How likely is it that the power will be restored.  Wednesday night an email arrived at 8pm.  Power was restored at the factory, a personal guarantee that the books would be done and ready for collection on the following afternoon, Thursday 19th.
The trip to Lettertec was a trial with driving rain and flooded roads.  But the feeling of holding your first book was some thrill.  Of course the problem then was trying to ensure you sold them, or at least enough to cover the costs and pay back the credit union loan.  The launch was the essential part we were told, and at least now we could look forward.

Liam Hartley at Jack Meades had offered the use of the pub free of charge as a way of saying thanks for the many blogs I had written previously highlighting the heritage value of the place. Dylan Bible and Amanda Farady had offered their services freely too. So we had a venue and entertainment. Damien Tiernan of RTE had agreed to make the keynote, a man who knows a lot about the water and the communities that depend on it.  We had our posters out, it was covered in that weeks Munster Express thanks to journalist Kieran Foley and Fintan Walsh. Jean and Paul at Waterford in your Pocket added it to the weekends event guide. And the reaction of facebook and twitter was amazing.  It seemed nothing could stop us now.


Buy the book online if you live outside of Ireland.

Irish orders or clarifications via russianside@gmail.com


But the forecast on Thursday evening has a weather warning, storm Brian.  Friday 20th was a busy day, I was up at 5am as there was a blog to get out and then of course the last minute jobs.  By 3pm I was starting to flag, unfortunately the storm was doing the opposite.  Outside the wind started to howl and the rain started to come down hard.  And then the messages started to arrive, messages of apology! The weather was too bad to travel. People were really disappointed, and it was totally understandable if not the safe thing to do.  I even wondered was it fair to go ahead. By 6pm my mood and energy was on the floor, but Deena dragged me out the door.  "The show", she said, "must go on".

At about 7pm what felt like the final nail in my coffin, was a text from Damien Tiernan. A flood was expected in Clonmel and Damien was going live to report for the 9 o'Clock RTE News.  He had to cancel, sorry about that etc. He had warned me it was possible before he ever took it on.  Deep down I was gutted, but I had to be fair, he has a job to do.  So I dug deep and sent him an understanding text.  Seconds later he replied with a "got ya!"  I could have killed him, but was too relieved.
And then the door started to open and people flooded in.  So many I became over-whelmed...not then, but now as I am writing this.  People I knew all my life, people like my neighbour Bridgid Power, 92 our eldest resident in the village now. My old schoolmates from Faithlegg Brendan Foley and Michael Duffin, William and Ger Doherty.  People like Michael Farrell of the Barony of Gaultier Historical Society who would walk through a block wall for you.  And people who I don't even know except from the blog, people such as John Myler who came along with his family and who up to then I only knew through the social media world.  To be honest the time was brief with little opportunity to properly speak with people and soon it was time for our very capable, and village elder in his own right to call the evening to order, Tommy Sullivan.


Damien brought the house down with his talk.  It was everything I had imagined it would be.  He spoke of our traditions, the characters, the nicknames, the inter-village rivalry and the desolation that not being able to fish creates.  But he also spoke of the importance of working together, of digging deep, and of trying to rise above the naysayers, individuals who go out of their way to undermine and destroy those who try their best to achieve something positive.
Ray McGrath stood in for Noel McDonagh and spoke on behalf of the SE FLAG who had agreed to provide a percentage of funds towards the printing costs, and my dear friend Damien McLellan said a few words on the editing process, underlining the fact that we all need support in realising our dreams.
I'm not sure if Ophelia or Brian were sent to test my resolve or just to underline the struggles I had to overcome in being a young fisherman.  Nature is something I admire, respect and am humbled by.  But fishermen can't allow weather to dictate their lives.  Except maybe a hurricane!

I publish a blog each Friday.  If you like this piece or have an interest in the local history or maritime heritage of Waterford harbour and environs you can email me at russianside@gmail.com to receive the blog every week.
My Facebook and Twitter pages are more contemporary and reflect not just heritage
and history but the daily happenings in our beautiful harbour:
F https://www.facebook.com/whtidesntales  T https://twitter.com/tidesntales