on December 16, 2016
Within two days in December 1917, Waterford experienced its biggest loss of seafaring lives with the sinking of Clyde Shipping's SS Formby and SS Coningbeg. Of the 83 souls who perished 67 were from Waterford, the harbour and hinterland and the effects were profound.  Because it was wartime, very little was written due to censorship, and many misunderstood the reasons behind it.  But in 1992 a Wexford man, Richard McElwee, committed pen to paper and finally told the full story of the loss.

The SS Formby was built by Caledon SB. & Eng. Co. Ltd., Dundee in 1914 and was considered the flagship of the Clyde shipping company. She was 270 feet long, 1283 tons and had a top speed of 14.5 knots. Although primarily a cattle transport vessel she could accommodate 39 first class and 45 steerage passengers.
The SS Coningbeg was originally SS Clodagh built for the Waterford Steamship company by Ailsa shipbuilders in Troon, Scotland, August 1903. When the company was sold to the Clyde in 1912 she was renamed. In 1913 she underwent a total refit. She was also 270 feet long, 1278 tons and capable of a top speed of 16.5 knots. She could carry between 5-600 head of cattle and 86 first class and 74 steerage passengers.


Both ships ran a twice weekly service carrying passengers, livestock, foodstuff and general cargo from Waterford and returning with passengers and general cargo from Liverpool. The trip was 16hrs one way and both ships had a reputation for strict time keeping.  As WWI raged the ships and crews were constantly in danger.  Not alone did they assist the war effort, but the kept both sides of the Irish sea fed, and more importantly for themselves, no doubt, provided food and an income for their own families.  Both ships had had skirmishes with U Boats and one example I found from the Munster Express of Feb 1915 concerned the Irish sea being temporarily closed to shipping due to a U Boat threat. The Coningbeg was confined to Waterford port which caused mayhem as her cargo of cattle had to be unshipped and accommodated elsewhere. Meanwhile the families of the Formby gathered under an increasing cloud, fearful as there were unfounded rumours that she was sunk.  Later that month, the Kerry News ran a story that the Coningbeg failed to put to sea, due to a dispute between the crew and the owners over a war bonus for the risks they were taking.

At 11am on Saturday 15th December the SS Formby slipped her moorings and travelled out the Mersey and into the Irish sea. Aboard were 37 crew and 2 passengers.  She was due into Waterford the following morning, but when she did not arrive there was only minor concern.  As Saturday had progressed a storm of sleet and snow had developed and had become a gale overnight, causing widespread damage.  In Waterford it was presumed the Formby was sheltering and would be in to port later on Sunday. She never arrived.  As the fears grew it was decided to send word to Liverpool to halt the sailing on the Coningbeg.  No telegrams could be sent however, as all the lines were down following the storm.

Having sat out the storm in Liverpool, the Coningbeg set sail for Waterford Monday 17th December at 1pm.  Oblivious to the concerns in Waterford she departed with a crew of 40 and 4 passengers. When she failed to arrive pandamonium esued.  Family, relatives, neighbours and friends gathered at the Clyde company offices for any scrap of news.  Over Christmas the vigil continued but on Thursday 27th December the company felt obliged to write to each family confirming everyones worst fears, that they could no longer hold any hopes for their loved ones return.

Of the ships no trace was reported, and although locally it was considered to be too much of a coincidence that two fine ships would both disappear within two days of each other, except there was hostile involvement. A special appeal fund was created to fundraise and provide for the seamen's families until such time as they could qualify for the Board of Trade War Loss Pension (1920 in some cases). The appeal fund was still in use in 1927.

In time the body of the Formby stewardess Annie O'Callaghan would wash ashore in Wales, the only body to be recovered apparently (or at least positively identified).  The remains of two lifeboats and a nameplate of the Formby also.  (I read a newspaper report of a nameplate of a nameplate of the Coningbeg washing up too, but could not find any evidence of it.) But it would be the publication of Ernest Hashagens war diary which would finally confirm the fate of both ships, blasted from the Irish sea without any warning, or chance to get to their lifeboats*, by the U Boat U-62.

Down the years many still held that the ships were lost in a terrific storm. But on the 75 anniversary Richard McElwee published his account of "The last voyages of the Waterford Steamers".  The book which goes into significant details into the sinkings and included excerpts from Hashagens memoirs makes for chilling reading.  But it also served to remind the public of the service these sailors gave to the city, country and the war effort of WWI. 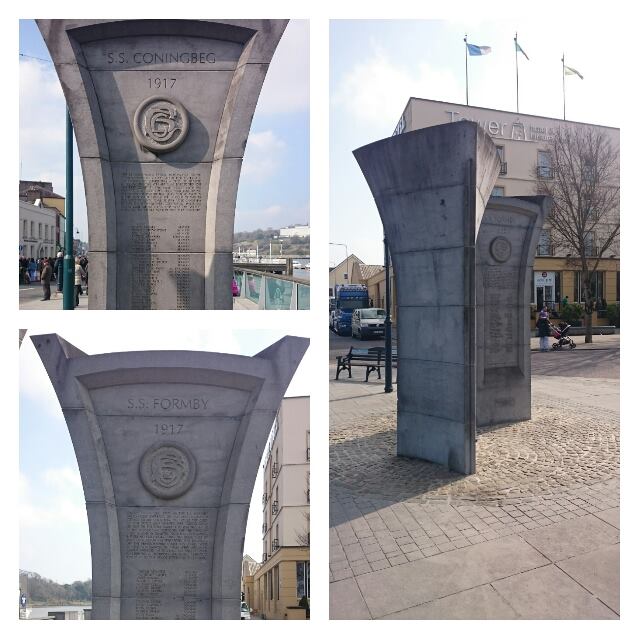 In remembering them, it possibly also led to the significant memorial, now situated on the quay of Waterford (above) which lists all the names (as does the link here written by a fellow Cheekpoint man) and was unveiled by the then president of Ireland Mary Robinson in February 1997. They are also remembered on the Tower Hill Memorial in London to merchant seamen, the Dunmore East memorial wall to Waterford seafarers and the more recent memorial wall in Dungarvan to those who died in WW I.  But I imagine, they are remembered no where more often than in the hearts of their own families and particularly at this time of year.

* It should be said that each ship had a gun aboard with two Royal Navy Gunners apiece.  Had the U Boat surfaced and gave an opportunity to evacuate the ship, there was also a risk of being fired on, rammed or being outrun.  On the other hand, and perhaps more dangerously, it could have been a Q ship