on September 09, 2016
Comparisons, it's said, is the thief of joy.  So when it comes to the two lighthouses at either side of the mouth of the harbour, I would suggest that it is silly to choose one over the other. Hook light is much better known as the oldest working lighthouse in Europe, but its Dunmore counterpart has an interesting story in itself and for me its one of the most beautiful pieces of architecture we have in East Waterford. 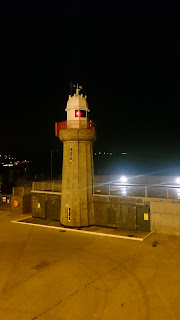 Dunmore (Dun Mhor, the big fort) has probably always been a fishing village, or at least those who landed up there, took part of their food supply from the waters thereabouts.  But its first harbour development of any merit was the work to facilitate the Mail Packet Station.

The Packets as they were called, (because mail in those days tended to be bulky packages of official correspondence) had been in use since Tudor times but the Waterford run was unofficial and thus an unreliable service.  The official Mail Packet Station was established at Cheekpoint in 1787. The service utilised small fast cutters which sailed between the harbour and Milford Haven and carried mail, freight and passengers. Seven ships worked a 6 day sailing schedule.  But the location at Cheekpoint led to complaints, as having sailed from England the boats had to negotiate strong tides and were at the mercy of contrary winds.

In 1813 the service was moved to Passage East as an interim measure but plans were already afoot to create a purpose built pier at Dunmore East to facilitate the packets.  Under the exacting eye of Alexander Nimmo (1783-1832) work commenced at Dunmore in 1814 and the packets started sailing from there in 1818 (sources differ on this).  However the lighthouse seems to have been an afterthought and a temporary light was installed whilst Nimmo set to work on what was his first and, from what I have read, only such building. Work commenced about 1820 and was completed by 1824 and became operational in 1825.

The tower is made of Granite, which contrasts beautifully against the old red sandstone that predominates in the breakwater and surrounding cliffs.  The tower is a fluted doric column which stands 16 meters tall including the lantern. Initially the tower was whitewashed, but thankfully this was discontinued over a century ago.

Although the stone work is beautiful, the cast iron lattice balcony also deserves attention.  This is of forged steel and is one of only two such examples in the country, but apparently follows the practice of other Scottish lighthouse builders like Robert Stevenson.  The lantern is constructed of metal with square windows and a weather vane completes it.

The light can be seen for 17 nautical miles.  It was initially fueled by oil lamps and reflectors but this was replaced by acetylene in 1922 and it was electrified in 1964 using batteries and since 1981 it's run off mains power, with a back up generator.
In 1824 there was a report that the lighthouse keeper and his family were living locally because the accommodation at the tower was uninhabitable due to damp.  I'm unsure if this was at the tower itself, or in the square building that makes up what I always heard called the storehouse; the flat roofed building that is built around the seaward side.  The lighthouse keeper position was removed in 1922 and was replaced by an attendant.

Although Dunmore pier and lighthouse was built to accommodate the Mail Packet, the irony was that by 1824 steam powered vessels were already in use on the route.  As a consequence of the ability of such ships to journey against the tides and winds, campaigning began to move the packet once more, this time to the city and this occurred in 1835.  Dunmore reverted back into a fishing harbour and in Victorian times a tourist destination.
Perhaps because it is now integrated into the storm wall, or that a flat roofed store house surrounds the tower, the Dunmore lighthouse does not have the stoic isolated feel of other houses such as Hook.  But it’s a remarkable piece of architecture and a testament to the vision and craftsmanship of Nimmo and his team.  Local photographers such as Jamie Malone and Brendan Grogan appreciate it. The Barony of Gaultier Historical Society use it on their Facebook page as a cover photo. And the Buildings of Ireland think highly of it too.  So if you havn't already done so, next time you get a chance take a stroll along the breakwater and take a closer look.

I took information on the lighthouse from:
http://www.irishlights.ie/tourism/our-lighthouses/dunmore-east.aspx 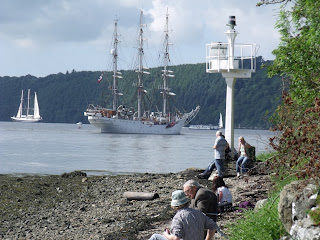