on April 01, 2016
Some might consider this title a mite provocative.  Indeed others might think on the date of publication and ponder a connection. However, although it is intended to be provocative, it is in no way a joke. The monuments I refer to are at least a millennium old and are quietly slipping into oblivion.  They are the Head Weirs of Waterford harbour and, at this point, are very possibly unique in the world. 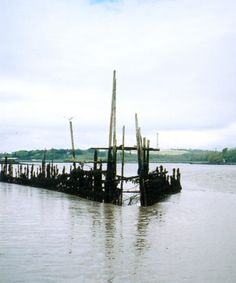 Firstly, let me define a monument.  The concise Oxford dictionary states that "3. an ancient building or site etc that has survived or been preserved"  The head weirs certainly fit this definition having been worked over the centuries and regularly maintained by their owners/leasers.

What is a Head Weir some might ask.  A Head Weir is a method of catching fish which uses the tides to bring the fish to the net. As such in legal terms it is defined as a "Fixed Engine". The weirs themselves were a V shaped structure. The mouth of the weir is the widest part of the structure. The wings that made the v shape were constructed from straight poles driven by manpower into the riverbed, and held together with horizontal beams. Both wings came together at the "head" from where a net was hung, and it trailed away from the weir. This conical net worked similar to a modern day trawl net.

Depending on the direction they faced, weirs were known as Ebb or Flood weirs. An Ebb weir had its mouth facing upriver, and when the tide was leaving the harbour, it flowed through the mouth, towards the head and concentrated the flow of water into the fishing net, in much the same way a funnel would direct fluid into a bottle.

Taking the ebb weir as our example, the net was hauled at low water by bring a punt alongside the weir and hauling down to the cod end. The cod end was taken aboard and the fish emptied into the punt. (In summer time the weirs tended to be used for bait for eel fishing, and in winter they caught bottom fish like cod, flats etc. Herring shoals would be a problem at times, with millions swimming in the habour in just one shoal, weir nets would have to be hauled up, or risk being carried away.) The net was then reset, but would only start fishing again, when the ebb tide started to run. (The tides in Waterford have a 6hr 20min cycle approx)

As to the age of the weirs, well even locally there is confusion about this.  Growing up in the harbour, there was uncertainty about the weirs, because a lot of newer weirs were constructed by the landlords in the early 19th C, a method known as the scotch weir, typified by the construction at Woodstown. Many of the older weirs were amended at this time.

However, the Head weirs were recorded in the monastic possessions of the Cistercians during their dissolution. The Cistercians started construction at Dunbrody in the harbour circa 1200.  But it is interesting to note that when the Knights Templars were granted land and ferry rights at Passage and Templetown (1170's) and "they operated a salmon weir, or fish trap, a large edifice of strong wooden poles, built in the river, which channeled salmon through an ever narrowing chute towards an exit, where they swam into a net"2 What I can't answer, but suspect, is that they Templars took over an existing structure, rather than building their own,
Interestingly some more recent research has indicated an earlier development of weir in Ireland, but not directly a connection to Waterford. It claims that certain structures in the Shannon and in Co Down, were V shaped structures of stone or wood.  The dates on these structures are Early Christian and records the earliest to between 447-630AD. It also notes that laws, dating 6-7thC, were written to oversee the use of weirs.

Although I have no proof that the Waterford Harbour weirs are a continuation of use back to Early Christian times, I think they are nevertheless a spectacular connection to Ireland's ancient east. To allow such structures to simply disappear due to neglect and disinterest (principally due to official disinterest) is to my mind a disgrace, Hopefully, the heritage value of the weirs are realised soon. Otherwise we may have just memories, photographs and written words as a basis to our interpretation of them.
I publish a blog each Friday.  If you like this piece or have an interest in the local history or maritime heritage of Waterford harbour and environs you can email me at russianside@gmail.com to receive the blog every week.