Jack Meades or Half Way House

on April 29, 2016
Jack Meade's is one of Waterford's, if not the country's, most popular pubs/restaurants.  Like all businesses it has had to adapt and diversify to remain viable, and given that it's over 300 years old, its seen more than a bit of change down the years. 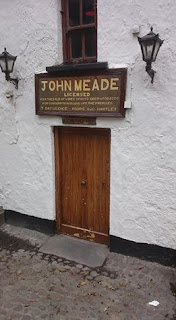 The pub itself says over the door that it was founded in 1705.  It was recorded in November 1710, that one Jenkin Richards leased the inn from William Harrison who lived at the time at Ballycanvan House. Richards was said to lease "the house commonly called or known by the name of "Half way house" 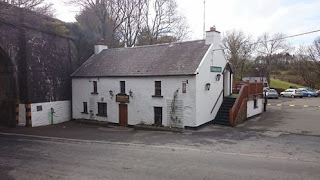 James Guest, (how's that for a landlords name) and his son John were running the pub in 1721 and the family lived on the premises. The last of the family recorded here were the brothers Robert and James Guest who dropped their lease in the 1770's. Despite searching high and low, I couldn't find any other references to lessee's until the mid nineteenth century. At that stage, in 1857 to be exact, the pub was being run by John Curtain. 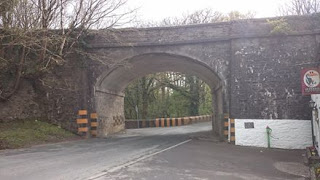 It was at this point that plans for a new bridge emerged and there was some concern that the pub would need to be relocated. The bridge was constructed circa 1860 but the pub was left in place. It was built as part of a failed enterprise of running a railway line to Passage East, a plan which included the enterprising Malcomson family. The need for speed in the cross channel ferry service was the momentum behind this. The enterprise was made up of visionary and influential businesses, who realised that a ferry terminal at Passage would take an hour off the normal journey time between the city and Bristol. It was also a viable option to the location of the SW Wexford Railway line between Waterford and Rosslare, which I've written about previously,
John Curtains daughter, Elizabeth Meade, took over the pub on his death. Her son Thomas Meade was next to inherit passing it on in turn to his son John, commonly called Jack. Jack ran it up to the 1970s at which point it passed to his own daughter Carmel. Carmel and her husband Willie Hartley run it still, although it has grown in size in the intervening period, and their son Liam runs the busy food part of the business.
Although it is now more commonly known as Jack Meades, for years the name Half Way House was associated it. When I was growing up the pub could be referred to interchangeably and without confusion as "Jacks", "Meades" "Mades" or indeed the "Half way house". The place name of half way house is a common enough one, and designated a stop off point in days of old when carriages, carts, joulters, jarveys and so many other horse driven transports plied the busy road to Passage and Cheekpoint. Until the bridge was built the main road to Passage continued along the Cheekpoint Road to Strongbows Bridge and then diverted up Carriglea.

I've written  before about how as a child the lure of the areas was Willie's agricultural contractor business and all the shiny tractors on show as we passed on the Suir Way Bus service.  Back then the pub was little more than the older building with parking for a few cars.  All that changed however when Carmel and Willie with the help of the ever present Mickey Mac, began to reclaim some of the bog for car parking to accommodate the growth in business.  In my late teens and early twenties it was the only place to be on the weekend and many was the high, and a few lows, I had there.

At this stage it's the heritage value of the site that draws me back and if and when you call be sure to explore the area for yourself.  Here's some related pieces found on or close by to whet your appetite;

Thanks to Liam and Carmel Hartley for much of the information I have on the pub in this piece, and for access to take photos of the pub and area.