Misadventures of a gravedigger

on October 02, 2015
Regular readers may be surprised to learn that I have something in common with Abraham Lincoln, Joe Stummer and Rod Stewart.  Well As a fishermen in the 1980s Cheekpoint, and in the depressed economy of the time, you quickly learned to take a few pounds wherever you could make it.  Sometimes it was a few days on a building site, maybe a spell of farming, some painting and decorating.  But in common with the former I also did a stint at gravedigging.

The life of a gravedigger never really appealed to me to be honest.  I was about ten when I first encountered grave digging in Faithlegg.  Our granduncle Christy Moran had died and I went with my Grandmother to the church.  Pat Moran had driven her up and I was accommodated by kneeling in the back of his ford escort van.  In the front she had a bag which looked heavy and jangled but I was uncertain what it was for. 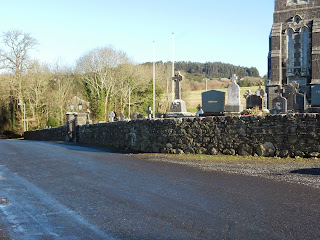 When we walked into the churchyard she headed up towards the back.  It was a time when Faithlegg was an overgrown wilderness and making your way amongst the headstones was an adventure.  In the distance I could see a pile of earth and as we walked towards it, another shovel full of soil flew through the air and joined the yellow soiled pile.

In the hole, was Martin Nugent (RIP), beavering away on the shovel.  While squatting down nearby was my "Uncle Paddy" Paddy Moran (RIP) taking his ease with a Players Navy Cut cigarette in his mouth.  Martin Clambered out of the freshly dug grave on our appearance, and settled himself down beside Paddy, lit a fag and drew a great big phlegm from deep inside him and spat into the grass.  Then my grandmother took out a rectangular package of grease proof paper and the men set to eating ham sandwiches.  To quench the thirst a flask of tea was produced, it was already sweetened and milked.  Some large bottles of stout were presented and gratefully received.  These were set aside for later.

We didn't delay, once the flask was used she cleared it away and we turned towards the gate.  Martin wanted to know if I wanted to stay behind and learn the trade.  I shuddered at the thought.  I was happy to get out the gate and walk the few miles to home.

Gerry Boland offered my a start in the graveyard when I was about 19.  Gerry dealt with the negotiation with the undertaker and measuring out of the grave.  Once the grave was marked and the sod removed you had the basic shape and all you needed to do was stay in line with it. After that it was "head down and arse up" and just get on with it.

To dig you started with one side of the grave, dug with the pick, then your partner cleared it with the shovel, then you stepped down into the cleared side and worked on the other.  Over and back taking turns, it was easy enough at the start, but got harder the further you went.  And as you got deeper you also thought of the darker side of the job.  What would you find below, were you awakening the spirit of the deceased, would the sides cave in and trap you.  If these weren't bad enough Gerry had a legion of stories, each one worse than the last, and the undertakers could always be relied upon too.  Gerry also had a legion of quips, quotes and sayings, such as"If you don't go to other men's funerals, they won't go to yours"!  On my first grave we were about mid way down when I asked Gerry when would the tea and sandwiches arrive..."Did you bring any?" he asked.  For some reason the tradition had stopped sometime in the previous ten years.  Now it was payment from the undertaker, and you looked after yourself.

Sometimes it was easier than others.  Graves that had been dug before were generally easier.  Graves which hadn't been opened in decades could take much longer.  Occasionally a grave was brand new, so then you just didn't know what you would face.  I missed out on a job at one stage and Gerry had to get another chap from the village.  It was his first grave and as they got down into the hole, they struck a bit of rock.  Gerry had to pop off to do a message and explained that the chap should use the pick to loosen the soil around the rock, and that hopefully it would shift.  He got delayed and didn't return for about an hour.  But as he walked in he could hear the chink chink of metal on rock.  Getting to the grave he was met with a very strange sight.  The chap was still in the grave but the entire floor of the grave was a solid sheet of rock.  In his hand was the pick, but the tine was now bent back, a withered and useless mess.  Gerry asked him why he hadn't stopped..."you told me to keep digging" was his reply.  They later got in a rock breaker, but had to give up and dig an alternative.

My worst moment came one bright summers morning.  We were digging an old existing grave up the back.  Gerry had come early but had to head off to milk cows.  It was agreed that he would get a start on it and then leave, and I would finish it off.  When I got there the grave was already well down so I grabbed a spade and launched myself in.  I was expecting a solid surface but next thing I knew there was a crash of splintering wood and I sunk into an old coffin.  In that moment all the sum of my fears about working in the graveyard swirled up around me.  My two feet were stuck, I was five feet down and only my head was showing.  I thought of the body lying in the coffin, I thought of the sides closing in, but mostly I thought of the relatives arriving and what they would make of such a spectacle.
Although I wasn't much for church or prayer at the time, I said a slow purposeful Hail Mary, concentrating on the words, in the hope that it would calm me and give me inspiration.  Before it was over I was already realising that I had the spade and could use it to reach the pick, and with the pick I could smash me way out.  Sheer relief spread over me as I started on the coffin.  I was petrified of what I might find staring up at me, a corpse, mortified by the disturbance, or a skeleton that would pounce on my throat and wrestle me to the earth.  However, despite all the fears, although the coffin was solid, the body that had lain within and long ago turned to dust.

On those occasions that we found bones etc in a grave, or even the parts of an old coffin, these were carefully removed to a bag, which was discreetly hidden and replaced into the grave before it was filled in.

There would be many more, but less dramatic misadventures.  A grave dug in the wrong place (an error by the undertaker), a family dispute at a grave as the coffin came up the path, graves caving in, coffins getting stuck as they were lowered into the earth, or graves flooded during heavy rain, which had to be bailed out with buckets.

All in all, I have to say that since that time, I have had nothing but a sense of admiration for the gravediggers.  They are probably the least noticed at any funeral, yet their role is as crucial as any other. I mightn't mention the connection with Rod Stewart again, but I was a big fan of Joe Stummer of the Clash!