the Faithlegg woman who died twice?

on September 11, 2015
One of the oldest grave stones in Faithlegg belongs to a family named Fortune.  But the headstone creates a bit of a stir...it gives two dates of death for the lady...1745 & 1746 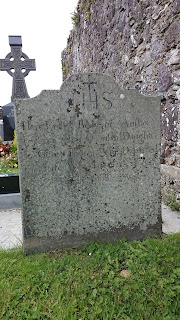 So who was the lady and did she arise from her grave like some halloween yarn or is there an explanation Despite searching I have not as yet found any further information relating to Anstas or her Father.  Present day searches suggest however that Anstas is now a boys name. Apparently it means resurrection! Was someone having a joke? Or was Anstas as fortunate as her surname suggests and got two cracks at the one life?

Well locally it was held that the solution to this mystery was a dispute between two calendars. The first calendar to mention is the Julian Calendar, which dated to 46 BC and commissioned by emperor Julius Caesar, who at the time wanted to amalgamate all the regions of his empire under the one system. All went well initially, and we still hold on to much of that system including the days of the week and months of the year. However an issue arose for the christian church in the middle ages.The calendar did not accurately calculate the exact time of each year - 365.24 days and as a consequence by the time of Pope Gregory, Church holidays were way out of whack with what the Christian church had traditionally adhered too.

To alleviate the situation Gregory XIII initiated a review of the system and in 1582 a new calendar was initiated known as the Gregorian Calendar. This allowed for a more accurate holding ofchurch holidays and dealt with the vexed issue of the date of Easter. But to align with the church festivals the new calendar required a reboot of the system. Thus in 1582 10 days were dropped from the year.

Not everyone was enamored with the Churches approach however. Much of protestant Europe protested and refused to embrace the change. Ireland was in a bit of a dilemma, ruled from protestant England yet in matters of faith leaning more towards Rome, many in the Irish church seem to have employed the Gregorian calendar years before it was finally embraced by England, (and thus politically, Ireland) in September 1752.

Now that still doesn't explain to me why a lady who died on 22nd Jan 1745, also listed 1746. As said the difference between the calendars was originally 10 days but as the years progressed it slowly widened - today it stands at 13 apparently, which you might need to know if you happen to visit with the nomadic Berber of North Africa, who till hold to Cesar's calendar. But at least we can relax about the chance of meeting the un-dead on a visit to Faithlegg
Anstas Fortune faithlegg church Faithlegg Graveyard Gregorian & Julian Calendar Headstones