Cheekpoint's era as an industrial village

on July 24, 2015
In 1785 Cornelius Bolton along with other investors bought out the Mail Packet Station, then based at Passage East and moved it upriver to Cheekpoint, Co Waterford.  Around this business, Bolton built a vibrant industrial village.  The man who came to run the Packet, a Welsh Quaker named Thomas Owen arrived in 1787 with two cutters and his family.  His youngest daughter Elizabeth recorded her observations of the village and her family in poetry and in 1826 published a book entitled "Poetical Recollections".

For this years Heritage week, Cheekpoint Fishing Heritage Project, which has participated in Heritage Week since 2005,  will partner with Russianside Tours to provide a walk and talk entitled Cheekpoints Industrial Age as perceived through the poetry of Elizabeth.  It will be held on Saturday 22nd August 2015 at 5pm and commences at Cheekpoint Quay.

Waterford has a wealth of early Industrial Heritage which we can sometimes ignore, despite the evidence being right before our eyes.  A report from Dublin Civic Trust highlights this in the county of Waterford but alas doesn't include much of what occurred at Cheekpoint.

We have met Cornelius Bolton and the list of his and his fathers achievements before.  Cheekpoint would see the development of a cotton mill and textile industry, a rope walk, brick kiln, cobalt and slate mining, a new road alignment, hotel and a regular coach service to connect the city with the packets.  There has also been rumor of ship building in the village.

All of these developments centered around the Packet, but from early on, there was criticism.  Given that the ships relied on wind power, and that Cheekpoint was so far up the harbour, there was much disquiet and criticism.  The authorities were looking at moving the station further down the harbour to Dunmore East.  We will look at this, and some of the enterprises mentioned above, in more detail on the blog in the coming weeks.

What of Elizabeth however.  Well her parents Thomas and Jane Owen had ten children, but many died in childbirth or very young.  Four survived to adulthood; Eleanor, Elizabeth, William and Samuel.

Her mother Jane died at Cheekpoint in 1811 and her father followed his wife in 1813.  These times are reflected on by Elizabeth and there is much sadness and loneliness evoked.  There is also, of course, many pieces that give a sense of the village, the maritime connection, her love of nature and and her privileged position within the community. 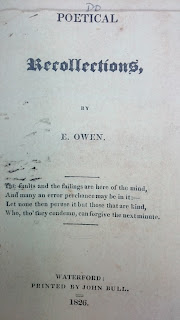 The death of Thomas Owen, was a prelude to what would befall the village, Cornelius Bolton and the packet. Following his death, but probably not because of it, the Mail Packet station moved back to Passage East.  Bolton was forced to sell off parts of the business and his land to repay his debts, culminating in the sale of his mansion at Faithlegg to Nicholas Mahon Power. The Packet would later be taken from private enterprise when in 1823 the Post Office took over the role and of course Steam was on the way too! Coincidentally, Thomas died on July 24 1813.  To borrow a phrase from a man very popular here in Waterford - On this day!

Please join us on Saturday 22nd August at 5pm at Cheekpoint Quay to explore the poetry of Elizabeth Owen and Cheekpoint's Industrial Age.

We will also provide our regular walks, as part of the week, Cheekpoints Maritime Trail will run on Wednesday 26th and the Faithlegg Heritage Tour will run on Sunday 23rd & 30th.  Details on our website at www.russiansidetours.com or via the links above from the Heritage Council website for the week.