on June 12, 2015
I was never great at school.  But one specific class I can remember as a highlight was a lesson one day on placenames.  I don't recall if it was a planned session, or if it was an aside.  But Michael White who was principal at Faithlegg was talking about how important it was to appreciate the Irish language, when it came to an analysis of the origins of placenames.  He gave a brilliant example, Knock Boy or in Irish Cnoc Bui.  The cartographer obviously hearing the name spoken in Irish tongue, completely twisted a beautiful geographic description of Yellow Hill, to a totally irrelevant English language replacement.  I found the translation, of what in my minds eye was a hill festooned with in-flower gorse, and that heady coconut like smell on a hot day, an insult to those who had gone before.

The townland I was born and raised in is called Coolbunnia.  Its a strange enough name, and not one I have come across elsewhere.  For some reason our area doesn't seem to fall neatly into so many of those obvious Irish placenames such as Rath, or Ard or Dun.  Mind you we do have a Kil.

Canon Power in his Place Names of the Decies decried the fact that during his studies that native Irish speakers were not to be found in our area.  No surprise in a Barony called Gaultier; land of the foreigner.  With so much settlement and trade, the pressure on a native tongue must have been pronounced down the years.

For the learnered priest then, Coolbunnia, despite the fact that he didn't have a native speaker to pronounce it, suggested to him the "Ridge back of the stream"  The Stream I have always thought is that which flows from below Everetts, now Malachy and Michelle Doherty's.  It flows down to the left of the road as you drive towards Faithlegg and flows under the road at the "bridge" and then down the Glen and to the Suir.  The stream rises in the fields below Malachy's and in years gone by a well was oft used to quench your thirst, fed from the source.  The ridge in this context of course is the Whorthill which winds its way towards Passage high above the estuary. 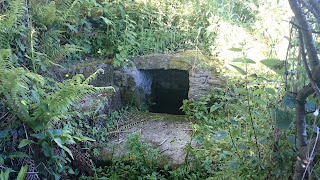 According to Power it didn't actually exist at the time of the Down Survey.  Then the entire area was known as Faithlegg.  So sometime in the past two hundred years we have had the two local townlands added, Coolbunnia and Cheekpoint.  The following map highlights the extent of it, spreading from Tom Sullivans to the ditch at Vic and Eileen Bibles and from there back to the River. 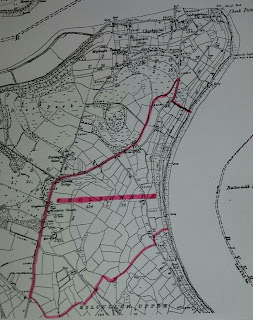 Of course Canon Power could be wrong. He spelled it Cúl Buinne.  But the Irish placenames site, Loganim considers it Cúil Boinne.  The Cúil in this case is considered a nook or a corner,  They also provide several other spellings including Couboyngne and Coolbunna and interestingly the name Coulboygun is dated to 1313.  Another interesting fact is that it's the only Townland placename of its kind in the country.

I often wondered if I had picked up more Irish would I have had an advantage in deciphering placenames.  But for the last eight years I have sat beside a native Irish speaker in work and she has reminded me several times that such queries are the gift of specialist people, so many complexities and variations are involved.  So I can let go of that bit of guilt anyway.
Canon Power Co Waterford Coolbunnia Down Survey Faithlegg Loganim Placenames