on May 29, 2015
About forty years ago I went with Michael Duffin and his mother Catherine to have our hair cut by Mandy over in Woodlands Avenue.  We got the hair cut first and then we went off for a stroll while Catherine received the full attention.  Wandering along the avenue we followed a path down towards the river when we came across an old crumbling building,  I had two memories of it, first its ramshackled nature and second that I stood into cow slurry, that stunk to high heaven when we got back to Mandys and meant that Catherine had to lower the windows on the way home. 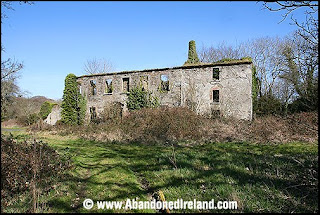 The house we had stumbled upon was the original seat of power, if you will pardon the pun of the Powers of Ballycanvan, a family directly related to the Powers of Curraghmore and thus direct descendants of the original Le Poer that landed as part of the Norman conquest.  The original tower house, similar no doubt to Ballymaclode castle directly across Ballycanvan Stream (which flows past Jack Meades pub) was later built on and added to.  The following is a brief historical run of the owners or occupiers at one time or another.

In 1537 there is a list of crimes held against one Thomas Power of Ballycanvan including many extortions of travellers, no doubt using to advantage his location.  In 1598 a stone chimenypiece was built with an inscription carved to Richard Power, 4th baron le Poer and Katherine Barry.  In 1697 a Captain William Harrison was leasing the property and this was continued by his son John Harrison.

It came into the Bolton family when Rev Hugh Bolton (1683-1758) acquired the property as Dean of Waterford.  He was succeed by Cornelius Bolton the Elder (1714-1774) who took over in 1758 and extended his ownership to the Mill Farm in 1765. It was here that Arthur Young, the travel writer and chronicler of industrial and agricultural development, visited when he came to East Waterford. We have also met the Mill Farm recently, and the works of Cornelius too.  A Georgian mansion was added to the castle at this point.

Cornelius Bolton the younger, (1751-1829) sold the house to his younger brother Henry around 1792, no doubt to assist in the ongoing investment at Cheekpoint.  Henry however, leased it not long before he died, in 1805, to Samuel Roberts (1758-1834) son of honest John Roberts who did substantial work to the property.  On Henry's death ownership went to his daughter Elizabeth, a fragile lady who had a nervous breakdown in 1807 and never recovered.

In 1818 Roberts dropped the lease and Thomas Meagher (1764-1837) took on the property.  The Meaghers remained at the property until 1829.  Subsequently the property was leased to Richard Morris and family until 1836.  The next family found on the property is George Kent (bc1786-1866), who made his money in the bacon trade, and was renting from 1848 to his death.

Elizabeth Bolton died in Devon in 1852 and Cornelius Bolton the youngers eldest son Cornelius Henry inherited the property.  This he sold in 1857 and it was apparently bought at that time by Patrick Power of Faithlegg House.

The Kent family seem to have continued to live on in the house for some time afterwards, but at some point in the subsequent decades structural problems were found in the building and it fell into disrepair.  What now remains is a sad reminder of a very busy and illustrious past.


The information contained in this piece comes via Mark Thomas in the following article for Abandoned Ireland; http://www.abandonedireland.com/Ballycanvan.html