on April 03, 2015
For some reason, I have had, for as long as I can remember, this idyllic notion of the workings of a watermill. It includes a gushing stream of water, the clanking of gears turning in a fine stone building, the dust escaping from corn sacks as they are spilled into a hopper and the coming and going of horse drawn carts in country lanes.
That idyll was fueled by passing Delahunty's mill at Halfway House. The rushing stream, especially in times of flood. The network of roads thereabouts, leading off towards even smaller country lanes. Fine solid gate posts on the left hand side of the road, marking the mill site as you come under the bridge on the way towards town. All in all it's location is a classic in terms of mill sites.
Today however its a crumbling ruin, but the old mill and the many outbuildings are still in evidence, Gone is the busy coming and goings of carts, farm labourers and workers, replaced now by motorists hurrying along the roads.  The mill is slowly fading back into the earth, being swallowed by trees and ivy, nature reclaiming her wealth.

Nature has every reason to flex her might.  As the mill itself required a legion of men at some point in the past to tame nature and through sheer might and engineering skills to create the mill in the location it's in.  The stream that flows past the mill, didn't actually power the mill you see.

Although the mill wheel was driven from the stream, it was actually impounded by a dam about 300 yards upstream in a man made pond on the Brook Lodge estate.  To get the water to the mill, which is located on ground above the natural stream, a "leat" or "headrace" was constructed by embanking stone and clay in a winding channel. Builders preferred to cut into an existing incline which automatically created one boundary, the other constructed out of the clay and stone that was excavated.  The present stream is fed by a spillway of the dam, to release the excess water.


Once a head of water was built up, it was released into the headrace and it coursed down to the mill and was directed over the wheel to drive the gears and belts that milled the corn.  Wheels which were fed by water from atop (overshot), were much more economical to run, perhaps 3 times more efficient than undershot wheels.  Another particular feature of the mill was that the mill wheel was actually contained within the Mill, not on the side. The water then ebbed away down the tailrace and rejoined the stream close by the bridge. 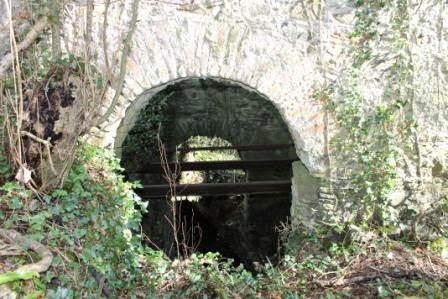 Unlike Ballycanavan tidal Mill with it's many negative running features, Delahunty's mill had a longer spell of life. Some months back I called to Eddie Delahunty in Kilcullen Lower to see if he had any memories of the mill.  I had mistakenly assumed that it was Eddie's family who had last owned the mill, but was corrected on this. However Eddie did recall as a youngster being at the mill and remembered the clanking of the machinery and the hauling away of bags of milled corn by horse and cart. Eddie was of the opinion that the mill had ceased working in the 1930s but reopened for a short time during the "emergency" or second world war.

Liam Hartley of Jack Meades could tell me that as youngsters he remembered the wheel still in place but in a poor state of repair.  He also reminded me that it was only part of a very industrious location in the past that included the pub, shop, post, blacksmith and the mill.  His understanding was that it was all part of the Ballycanavan estate at one time, another feature of the Bolton legacy.

Although the mill still stands, it is crumbling and in a poor state of repair.  It wont be long I fear before photographs, some written accounts and old maps will be all that we have of much of  our early industrial and engineering past.

Thanks to Eddie Delahunty and Liam Hartley for information in writing this piece.