on March 27, 2015
Last summer whilst out kayaking on the river I chanced a trip up Ballycanvan stream, which leads up to the ever popular Jack Meads at Halfway House.  I made the trip in an effort to track the route of the Lighters that would have supplied the Kilns at Jack Meades with limestone rock to burn. 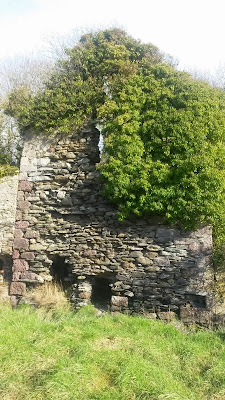 Not long into the trip however I came across a curious narrowing of the stream which was obviously man made as it was achieved with cut stone.  On getting out to investigate I realised I was looking at an elaborate structure, with, at its centre, an old watermill.  What I found most intriguing was that it was in design, very similar to the Saltmills at Dunbrody, as described briefly in last weeks introduction to the mills of the area.


I've sketched the scene in an effort to try explain it better, and hopefully the photos, above and below, may assist too.  Essentially at the high water, two sluice gates were closed to effectively dam the stream and hold the water back.

The stream was held back or "impounded" until the tide had ebbed away below the dam, and then the water was released under the vertical mill wheel, which turned the wheels to grind the corn.  The water passed under the wheel (undershot wheel) and would disappear down a "tailrace" to return to the stream.  You might note a smaller sluice or "spillway" about 2 1/2 feet wide on the sketch which was in place to safely release the water if required, for example in times of spate/flooding or when repair works were taking place.

Now visiting the mill is problematic for two reasons.  One its in an extremely bad state of repair, with a lot of fallen stone.  Secondly its currently overgrown and on private property, the site being owned by Dr Robin Kane.  I met Robin recently and he happily showed me round the site.  Not alone was I thankful for access, but I was also thankful for the mine of information he had about the mill.
The mill itself is a fabulous old building, whatever it's state of decline.  Some sections were actually built on bedrock which rises to over 6 feet in parts.  We could count three floors and we speculated that a loft space possibly made it four floors.  The floors were traditionally called from the ground; Meal floor, Stone floor, Bin floor & loft.  The windows are falling in so counting the floors required looking at the spaces for rafters in the walls.  Getting the corn into the mill was probably helped by the roadway that ran to the rear of the building, which was effectively two floors at least above the ground floor.

There were several other parts to the mill site, the two sections beside the mill were obviously built at different stages as the stone work is different and none are keyed into the other.  Beside the mill is what looks like a kiln area for drying corn and beside that was another large building perhaps a store and/or office space.  Another two storey two roomed building was built less than 50 yards from the mill further up the stream on the roadway that used in the past stretch to Halfway House.  Another structure apparently hewn from rock was to the rear, now overgrown and which we thought another storage area, perhaps for coal as fuel in the kiln.
Robin understood that the three sections had been built at different times, confirmed really when looking at the construction from the stream side.  His information suggested dating from Cromwellian times.  Although Captain William Bolton took the area from the Aylwards he did not have a reputation for investment in the property, although that certainly changed with his Grandson Cornelius Bolton, the elder, who I would suspect may have been the builder, but perhaps I am wrong.


Having never actually heard of the mill previously, I speculated that it must have been abandoned many years ago. Again Robin's information was that due to siltation from the river, note the mud is some photos, that it was abandoned in the mid to late 19th Century as it continually clogged up the wheel.*  Interestingly, there was no sign of a "tailrace" where the used water flowed back to the stream below.  It's hard to say if there was a pipe now buried with silt or whether it was an open cut which over time was backfilled, but I tend towards the former.

Robin had also heard that when corn was plentiful, or perhaps if the mill wasn't operational, corn was taken upriver to be milled elsewhere in Waterford and indeed up the Barrow.  I could imagine that at times of neap tides, sufficient water might be hard to store up in the mill pond. Perhaps another reason for it's early demise.

A final negative factor was that undershot water wheels were notoriously less efficient to run than overshot wheels (where the water was fed over the top of the wheel).  And there was an overshot fed wheel in the area.  It was just upstream from Ballycanavan and we will pay a visit to this next week.

* More recently I discovered a new article from the 1850s describing how the former mill was being used to recycle rags.  Apparently the mill wheel was used to crush and rip material, the strands of which was subsequently rolled into  balls and sold on.
Ballycanvan Bolton built heritage Cheekpoint Co Waterford Cornelius Bolton Faithlegg Flour Mills