The grand opening of the Barrow Bridge 21st July 1906

on July 18, 2014
We have written previously about the planning and construction of the Barrow Bridge. The bridge started in 1902 by the firm of William Arrol & Co to a design by one of the foremost engineers of the time Sir Benjamin Barker. The purpose of the railway line was to open up the South West of Ireland to exports with England in an efficient and quick manner, and speed the crossing times to England and Wales for passengers.  The lines specific distinction is that it was the last major railway line to be constructed in Ireland.  Barrow bridge is 2131 feet in length and has an opening span to allow shipping through to the port of New Ross. 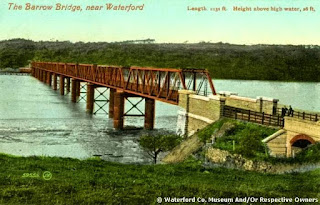 ﻿﻿Both the bridge and the line, including the new pier at Rosslare, Co Wexford was officially opened on Saturday July 21st 1906.  Five hundred guest traveled on a special event train which started out in Dublin.  The train had twenty one saloon carriages attached including the royal saloon in which was the Lord Lieutenant of Ireland Lord Aberdeen, who was to perform the inauguration.  It is said that it was the longest special event train ever seen in the country.  It stopped off at Carlow, Kilkenny and finally Waterford station to collect further guests including the Marquis of Waterford and then on to Rosslare via the new Barrow Bridge.  According to Susan Jacob, her grandmother Aggie Power (who lived in Daisybank house) was on that first train, a story handed down through the family. I do recall my father saying that there was some connection between the family and some of the engineers working on the project and Pat Murphy has told me in the past that he understood that some men stayed at Daisybank as lodgers during the construction. 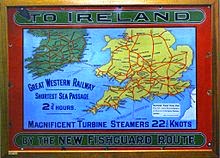 Apparently some of the guests fainted with the fear associated with the crossing of the Bridge.  Well they might be in awe, for it was by far the longest rail bridge ever built in the country at the time and would retain that distinction (and possibly still should regarding the expanse of water crossed) until Belfast's Dargan Bridge and related works were constructed in 1994. It might be hard now to imagine the fear that the travelers might have held in such a crossing, but it should be remembered that the designer and builder had only a few short years before completed a project to replace the largest rail bridge in the British Isles - The Tay Bridge , the predecessor of which had collapsed into the River Tay in 1879 while a train was crossing with the loss of all aboard.

The opening span was also a concern no doubt, but passengers need have had no fear.  The opening span was operated from a control tower atop of the opening, which was manned and operated via an electrical generator below on the protective pontoon.  The operator couldn't open the centre span unless and until signal men on both the Waterford and Campile sides gave a signal to say there was nothing on the line.

﻿﻿﻿﻿
Indeed initially ships would not proceed through the opening until a signal was also raised from the control tower, a black ball.  This would later include a green light when the bridge opening was extended to nightime.  Many is the time I marvelled at the nerves of these men sitting atop the span as ships passed through, and I'm sure their nerves were well tested as ships struck the bridge on at least two occasions.
﻿
﻿﻿Notwithstanding any guests concerns, the special event train proceeded onto the bridge and came to a halt half way across to give everyone a view of the meeting of the three sisters at Cheekpoint.
﻿﻿﻿﻿


It then continued on its way to Rosslare, where the three masted schooner "Czarina" lay at anchor and the steamship "Pembroke" was at the pier, having sailed earlier from Fishguard with invited guests.  As it crossed into Rosslare a 21 gun salute was fired by the local coastguard.  The new service was inaugurated from the pier by the Lord Lieutenant and this was followed by a party where several toasts were made to the good fortune of the new company.  The freight rail service was the first to start running on the line thereafter, followed by a passenger service which came into operation on August 1st 1906 and the first cross channel ferry left Rosslare on Fri 24th August 1906, sailing on the SS St Patrick.
﻿
The Barrow Bridge gave over 100 years of loyal service before being closed in 2010.  An event we have also marked.
﻿﻿
We would like to acknowledge the following sources:
Jack O'Neill, A Waterford Miscellany. 2004.  Rectory Press
Ernie Shepard - The South Wexford Line.  Journal of the Bannow Historical Society (2013)
John Power - A Maritime History of County Wexford Vol 1(2011)