on July 08, 2016
A picture paints a thousand words they say, and that was proven yet again recently when Catherine Heffernan posted to the Cheekpoint Faithlegg and Coolbunnia Facebook page.  The photo was of the Morning Star II, the pilot boat that operated from Cheekpoint when we were children and it brought the memories flooding back.
My Uncle Sonny returned from sea in the early 1970’s and took up the role of pilot boat officer from the village, servicing the port of New Ross.  His boat the Morning Star II was a familiar feature, and it was rare that you wouldn’t find Sonny standing on the quayside waiting for a boat, or in my Aunt Ellen’s house having a cup of tea in between boats.

The Cheekpoint pilot boat serviced ships entering or leaving New Ross. Because of our location at the point where the three sisters meet, the Barrow, Nore and Suir, and the junction to the two port, Cheekpoint was a logical choice for such activities.  I can't say I have yet discovered when the practice started but I do recall a photo, below, which depicts a pilot officer house, where pilots waited on ships from the late 1800's, and I'm guessing it was at least for most of that century.  Hobblers would have been to the fore prior to that.

New Ross pilots departed outgoing ships at Cheekpoint, or joined incoming ships to pilot the ships up through the Barrow Bridge to New Ross. I’ve blogged about the difficulties caused by the bridge before.  It also marked the point where the Waterford pilots took over.  Hence a Waterford pilot relieved his New Ross counterpart and took the ship to the mouth of the harbour, and was then relived of his duty and taken to Dunmore by the Betty Breen.  They also obviously performed the reverse role.

Of the pilots themselves I can only remember a few.  The New Ross pilots of the time were my Uncle John of course, and Mickey Duffin, Kevin Barry of Fethard and a Dutchman who I can only recall a smiling face and a smell of cigars.  Of the Waterford pilots  Willie Hearne, Pat Rodgers, John Whitty and the Walsh brothers and come to mind.

What made the whole affair so memorable was that Sonny would regularly take us children aboard the Morning Star II when he was going out to a ship.  We’d be hanging around the quay, fishing for flats with sprat bait, or playing rounders or soccer on the village green.  Sonny would give the nod and we would carefully hop aboard and sit on a small midship deck that housed the inboard engine.  The Morning Star was no more than 22 feet long, but beamy, and a whole gang of us could easily sit in comfort.

Local and visitor alike were taken aboard and away the whole party went.  We were always the happier if the pilot was coming from Ross and had to be dropped to the Island Quay, at Great Island.  It made for a longer trip.  Or other times the Waterford pilot might be put on an outgoing ship, the New Ross pilot come aboard, and then away to an incoming ship, which he re-boarded to take to New Ross. 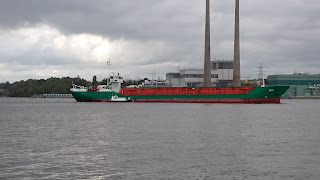 The scene was familiar to me from an early age.  Ship sited at Ballinlaw, coming towards the Barrow Bridge.  Sonny would slip the painter from the ladder at the quay, negotiate the salmon punts moored at the quay, cursing a floating anchor rope.  As the ship came though the Bridge, Sonny would get into position, lining up with the bow of the ship and approaching at an angle to close the gap.  As we neared there was always a flutter in my belly, the ship which looked small at the distance, rearing up and glaring down upon us the nearer we approached.  Always a curious smell, particular to ships a mixture of food, diesel oil and cargo such as fertiliser, oil or cement.

The ladder was down at the ships side, two deckhands waiting at the gunwale of the ship.  We come alongside, Sonny gunning the engine to maintain position with the ship, the pilot deftly hops upon the jacob ladder and ascends, something none of us would probably ever choose to do.  Sonny casually looking around, seemingly oblivious to the anxiety we felt, would he fall away from the ship coming close if not under the churning propeller astern, would we be sucked beneath the side.  Then having being relived in the wheelhouse, the New Ross pilot would be seen sauntering down the side of the ship, leg out over and onto the ladder, and waved off by the crew.  Once he had a foot aboard, Sonny with a deft touch on the wheel effortlessly drew the Morning Star II away and departed from the ship.


My preference was for going alongside tankers, which rather than a high side, had a railing and you could see much more of the ship and her fittings. The NO SMOKING sign seemed strangely out of place on a ship, as everyone I associated with ships and pilotage smoked, well, with the exception of Sonny.

All in all a magical era.  A time when health and safety and all manner of regulation were yet to be devised and jobs to oversee them yet to be created.  In some ways it was a bad time for children.  We know that from the various scandals that have come to light.  But it was also a great time to be a child, when we had freedom, were left to create our own entertainment, when parental fears, screen time and mobile devices were yet to suck up so much of children's time and innocence.