on November 07, 2014
Snowhill was, until recently, a mystery to me.  As a child I assumed it had to do with snowdrops, the late winter/early spring blooms that lift your spirits and reassure you that warmer, longer days are on the way.  Later I was told it's origins related to an old mansion which was sited there, but infuriatingly no more.  It came as a lovely surprise one day to be in the Waterford County Museum an find the photo below.  Its an old scene of Cheekpoint and it has Snowhill in the distance and the mysterious house.  I was so intrigued by it, I bought a copy and it still hangs from our living room wall. 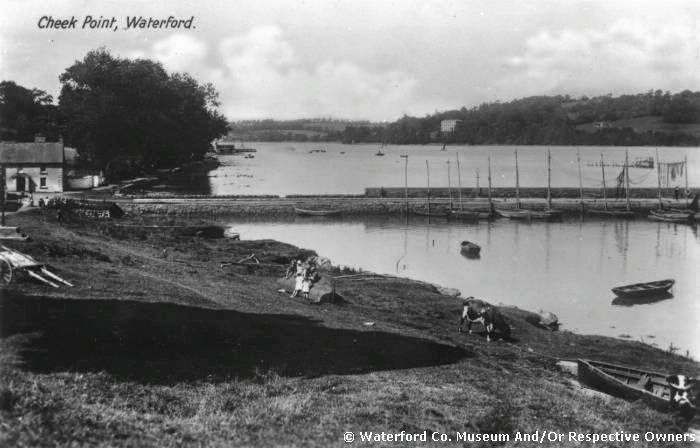 Recently however I came across some more information that helps me understand it a little more.  Snowhill is on the most south eastern tip of Co Kilkenny, and the townland is known as Drumdowney.  You will often see Drumdowney mentioned on maps and charts and particularly Drumdowney point or as we also call it "the point of the wood" where the Barrow Bridge connects Wexford to Kilkenny

But the Snowhill placename originates from a Cromwellian family, the first of which was a man called John Snow who was described as a "master tentmaker to the army in Ireland".  I can only speculate that he received the land as a gift, similar to the Bolton's of Faithlegg, for his part in the Puritan invasion.

Apparently Snowhill House was built by a descendant, most probably Sydenham Snow who married a Mary Bonham in March of 1764 and they moved into their new home in 1765.  It was described as a "massive Georgian block, 5 bay front, doorway with a very large fanlight.  Impressive hall with columns, splendid oval stone staircase with balustrade of brass uprights"  It was also described thus; "...demesne of 100 acres with a 6ft. wall all round.  A deerpark of 30 acres with a wall of 8ft high"


The last of the Snow family was Elizabeth and she married a merchant by the name of Patrick Lattin1792 but financial problems followed.  It was sold to help pay of the debts in 1808.

In 1808 it was purchased by the Power family who would later have first cousins on the opposite banks in Faithlegg & Cheekpoint.  The purchaser was one Nicholas Power and in much the same way that I think Faithlegg House was bought as a wedding present for Nicholas Mahon Power it would appear his cousin Nicholas purchased Snowhill for his son David and his Cork born wife, Elizabeth Nash.  The Powers retained the house until 1953 but under a new name - Power Hall.  Alas underinvestment had significantly undermined the structure and the house was pulled down in 1955.

Nowadays only the demesne walls and outhouses remain.  And despite the fact that Faithlegg House seems to have been a grander house, it had nothing like the connection with the River Suir.  Snowhill had a very fine quay - L shaped with a find breakwater of poles to the eastern side.  This was a deepwater quay and although the ebb tide meant the dock dried out was still a very safe haven.

Snowhill quay still has hints of its once significance and to walk up from the quay towards the house highlights how beautiful it must once have been.  An old boat house remains, roof gone and doors no more, but only begging to be refurbished.  The grand old trees, many fine and rare specimens of oaks and limes still adorn fragments of the old demesne.


Now a working farm, it appears to me like some once grand sailing boat now reduced to a sailing hulk, moored away on a redundant quayside.

All of the specifics about the house and history is information supplied from Jim Walsh's account of Snowhill House and Estate in "Sliabh Rua, A History of its People and Places" p429

Julian Walton mentions another family in connection with Snowhill in his recent book - On this day Vol I pp154-55 which will require further study.